Horrendous losses incurred by the national gas monopoly Naftogaz are driving Ukraine to the brink of economic ruin. The new boss Andriy Kobolev has to find a ride to the rescue by taking on corruption and pushing reform. By Claus Hecking for DIE ZEIT, translated by Handelsblatt Global Edition.

Kiev – Andriy Kobolev is the man who is supposed to save Ukraine from bankruptcy. The 36-year-old runs Naftogaz, the country’s state-owned oil and natural gas company. He wants to convince the world that he can transform what is probably Ukraine’s most corrupt and certainly highest loss-incurring company into a model operation. And do it right in the middle of a civil war and recession.

One day recently he was to catch a flight to a world gas conference in Paris. There he would explain his plans to the assembled luminaries of the global energy industry. Mr. Kobolev desperately needs supporters for the impending upheaval at Naftogaz. Above all, however, he needs their money.

Naftogaz is the heart of Ukraine’s economy. About 175,000 employees work at the gigantic state enterprise, the counterpart to Russia’s Gazprom. Through the production, import, transit and distribution of natural gas and oil to Ukraine’s inhabitants, the company accounts for about an eighth of the country’s entire gross domestic product. “But in recent years, Naftogaz was the cancerous tumor of Ukraine,” said an expert on the company. Eaten away by corruption, embezzlement and waste, the company is a playground for oligarchs and kleptocrats. 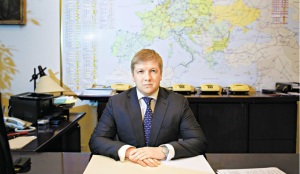 sold parts of our country and made themselves richer,” Mr. Kobolev said. His task is to reform the firm’s business practices. Naftogaz has incurred losses of about $4 billion, or €3.58 billion, which represents almost 6 percent of the country’s gross domestic product. Or a fourth of the entire emergency loan that the International Monetary Fund made available to save Ukraine from ruin a few months ago. The credit was issued only under the condition that there be a restructuring of Naftogaz, “the black hole in the budget,” as Hungarian-born U.S. business magnate George Soros has called the company.

Mr. Kobolev is an unusual combination: He knows Naftogaz from within but has a clean reputation

The IMF soon must decide whether the reforms initiated up to now are enough for the fund to issue the next segment of loans. For a while now, Prime Minister Arseniy Yatsenyuk has been raising the possibility of being unable to pay back foreign loans. The situation in Ukraine is that bad.

For months, the country has been fighting a war on two fronts: Militarily against pro-Russian separatists in its eastern reaches and economically against an 18-percent decline compared with the same quarter a year ago, 40-percent inflation and the impoverishment of millions of citizens.

Gazprom, the country’s largest supplier of natural gas, closed off the spigot to Naftogaz for six months last year because of alleged non-payment of bills. Now the Russians have announced their intention to expand or even build new pipelines to central and southern Europe — with the goal of completely stopping the flow of gas through Ukraine and cutting the country off from deliveries.

Mr. Kobolev admits he’s under pressure but, he said, “other men are fighting against Russian troops in Luhansk. Who am I to complain?”

Prime Minister Arseniy Yatsenyuk and President Petro Poroshenko appointed Mr. Kobolev, a trained economist, to take the helm at Naftogaz in the spring of 2014 after then-company leader Yevhen Bakulin had been arrested and forced to resign on suspicion of bribery. Mr. Kobolev combines some unusual characteristics. On the one hand, he knows Naftogaz from within. He worked at the company, previously as the right-hand man of the then-managing director from 2002 to 2010. On the other hand, he has a clean reputation.

In 2010, Ukraine’s then-president Viktor Yanukovych catapulted one of his cronies to the top of Naftogaz. Mr. Kobolev resigned despite his chances of having a successful career there and became the head of a small investment bank. “It was clear to me at that time what would happen to the company,” he said recently. “I didn’t want to be part of that system.”

For years, Naftogaz was a money bin for the country’s movers and shakers.

„The oligarchs played Monopoly,” said Georg Zachmann, an expert on Ukraine at the Brussels-based Bruegel think tank. Sometimes shady dealers and intermediaries came up with deals to the detriment of Naftogaz. Sometimes fuel was sold to oligarchs’ industrial firms at the extremely low, state-subsidized price for private customers. Sometimes natural gas simply disappeared.

Then there is the drilling platform which, according to the company’s management at the time, Naftogaz bought for $400 million in 2011. But only the agreed-upon price – $220 million – reached the seller, a Norwegian company that provides oil-related services.

Corruption at Naftogaz is not an isolated case internationally. In the anti-corruption ranking of countries by Transparency International, Ukraine is rated 142 among 175 countries — bringing up the rear in Europe. The rampant kleptocracy was one reason hundreds of thousands went to the streets to demonstrate against Mr. Yanukovych in winter 2014. When investigators later searched the house of the energy minister responsible for supervising Naftogaz, they found $4.8 million in cash and 42 kilograms of gold.

The company’s headquarters still exude an atmosphere from earlier times: the smell of linoleum, dark wooden paneling on walls, stucco decorated ceilings. A red carpet is laid out in the corridor in front of Mr. Kobolev’s office. Inside are display windows full of medals, trophies and certificates of his predecessor, Mr. Bakulin. “Andriy didn’t really move in here,” a colleague said. “We can’t be sure that we won’t have to leave in two weeks.”

From the very first day, Mr. Kobolev made enemies because of his attempts at reform. He fired 11 of 12 top managers from the Bakulin era, and intermediaries were discharged. When the head of the Naftogaz subsidiary Ukratransneft, a minion of the oligarch Igor Kolomoisky, was forced out recently, Mr. Kolomoisky ordered his private militia into action. Men armed with Kalashnikovs stood guard in front of the company’s buildings while the fired boss had crate after crate of documents removed. Mr. Kobolev is living dangerously. But as of now, he has the support of President Poroshenko.

The young manager might be a hero to some citizens. He guaranteed the country’s energy supply last winter. When Gazprom stopped deliveries in June 2014, he found alternative sources with the help of the European Commission. Hungary and Slovakia began sending natural gas to Naftogaz by thrust reversal, through the same pipes in which the gas otherwise flows in the opposite direction — from Russia through Ukraine to the European Union.

Yet many citizens consider Mr. Kobolev to be an unscrupulous wheeler and dealer. They point to the fact that he recently raised the price of gas for them on the average by 281 percent right in the middle of the worst crisis ever. “The reforms are painful, but there is no other way,” he said in his defense. He argues that’s the only way Naftogaz can reduce its losses and Ukrainians finally learn to use gas sparingly.

Nowhere else in Europe is so much wasted as here. Ukraine needs 11 times as much energy as does Germany to generate €1 through manufacturing. In urban centers, the heating systems of entire districts still operate on the Soviet pattern: sometime in the fall, the radiators start up in all apartments – and aren’t turned off until spring. Only the central distribution point can turn the heat off. Inside-temperatures of 77 degrees Fahrenheit are normal in many apartments during cold weather. Anyone who’s sweating just opens their windows. Up to now, gas was as cheap as dirt.

Naftogaz itself produced around half the required gas and bought the rest from Gazprom — and then furnished households with the fuel at only a fraction of the cost. The deficits accumulated by Naftogaz had to be covered by taxpayers. Not all citizens can afford it. Four out of five Ukrainians have slipped below the poverty level of €135, or $150, per month, according to the United Nations.

Despite the many challenges, can Mr. Kobolev reform Naftogaz? Ukraine expert Mr. Zachmann is skeptical. He acknowledges Mr. Kobolev has a vision for Naftogaz and his management team seems competent. “But down below in the hierarchy, things get difficult. The corrupt structures were established long ago. It will be difficult to find out who has technical expertise and is still clean,” Mr. Zachmann said.

Mr. Kobolev says his net monthly salary converts to €1,500. In a free-market economy, he would earn many times more. Why does he put up with all the trouble, threats and insults? He hesitated briefly and rubbed his hands across his young but pale face before answering. “We Ukrainians now have the chance to fundamentally alter our country.” If the reform process fails, there is great danger “that people like Mr. Janukovich will return to power. Then the people who were killed during the revolution would have died in vain,” he said.

Mr. Kobolev hopes the West will support Naftogaz and his country just as they did during the Gazprom crisis. Thanks to help from its neighbors, Ukraine survived the energy disruption and Mr. Kobolev achieved his greatest triumph to date. In early April, he used his strong negotiating position to convince the head of Gazprom, Alexei Miller, to lower the purchase price for the second quarter by 25 percent. In this way, Naftogaz is saving an estimated $300 million — and is now busily filling its gas storage tanks.

Because the young boss knows one thing quite well: The next crisis will surely come.